The pitot-static system records static and dynamic air pressure, providing the pilot with information related to airspeed and altitude.

Connected to the static and pitot (dynamic) ports, the airspeed records the pressure difference (speed); each is measured by an expansion box referred to as an aneroid capsule.

In the case that the pitot tube (port) becomes blocked (ice, dust, water, bugs), the airspeed indicator acts like an altimeter and under-reads during a descent, and over-reads during a climb.

There are three primary types of airspeed: 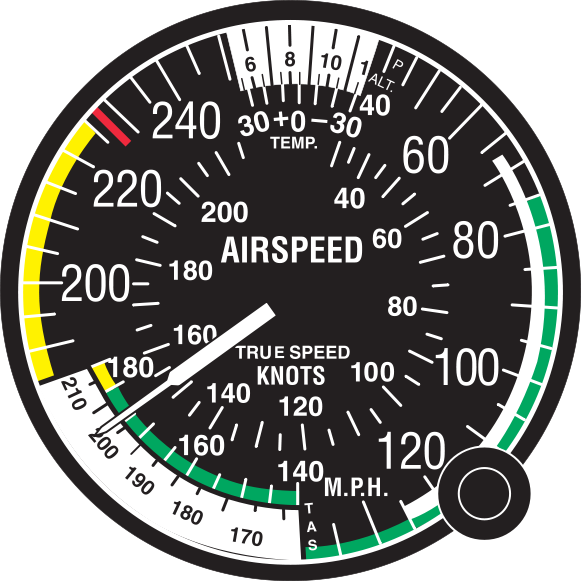 The altimeter is connected only to the static port and also uses an aneroid capsule.  It is calibrated on the basis of ICAO Standard Atmosphere assumptions of standard sea level pressure (29.92” Hg), a pressure lapse rate of 1 inch per 1000’, and a standard temperature lapse rate (1.98°C. per 1000’). 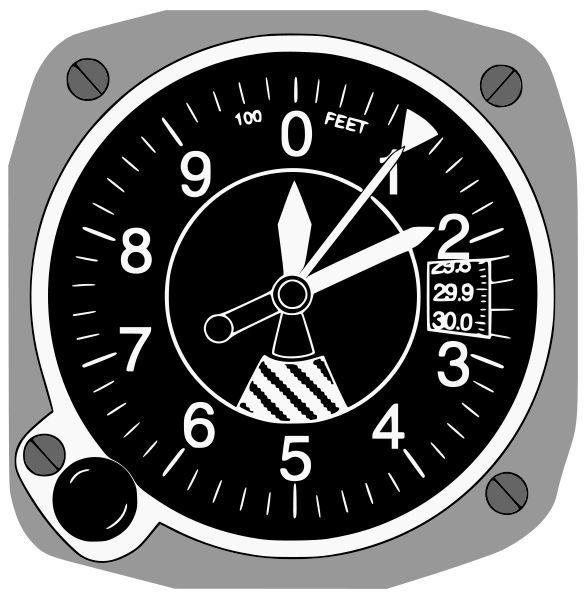 In the case that a static port becomes blocked during flight, most aircraft have an “alternate static source” switch in the cockpit that can be selected by the pilot.

If an altimeter indicates a 50’ error when set to the current altimeter pressure setting, the instrument is unserviceable (U/S).  During flight the pilot sets the altimeter to the nearest setting source (tower, FSS, etc.).

There are five types of altitudes: 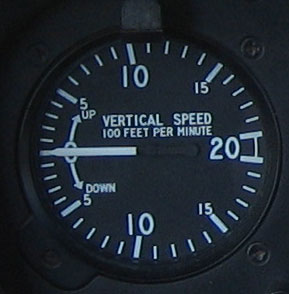 The VSI is most accurate recording small changes in altitude, but becomes less accurate the greater the rate of descent or climb.

It is connected to the static port, so an alternate means of restoring static pressure for the altimeter if the static port becomes blocked is to deliberately break the glass on the VSI.

All gyros consist of a spinning rotor held in a universal mounting or gimbals.

The spinning of the gyro is powered by two means.  The heading indicator and AI are driven by vacuum pressure (engine or venturi).  Engine-driven vacuum pressure is included among the pre-takeoff checks whereby the air pressure driving the gyro can be read in inches of mercury (“Hg.).  By comparison, the gyros on the turn co-ordinator (or the older turn and slip indicator) is driven by an electric motor; if the electric motor provides insufficient RPMs to the gyro, a “flag” appears on the instrument display.

In conditions of poor to zero visibility, it is impossible to fly an aircraft without flight instruments which depict pitch, roll, and yaw; in cloud, a pilot’s life rests with the correct function of these instruments.  The electric/vacuum drive systems provide backup whereby all of the instruments cannot fail simultaneously.

For added security, the gyro instruments are always checked during taxiing before takeoff.

Two principles affect all gyros: gyroscopic inertia (rigidity in space), and precession (perpendicular force on a gyro causes reaction 90° along the rotation direction).

The gyro for the heading indicator spins around a horizontal axis and provides aircraft heading information; it is set to the aircraft compass.

Because of the earth’s rotation, the heading indicator is subject to a precession error of approximately 3° every 15 minutes. 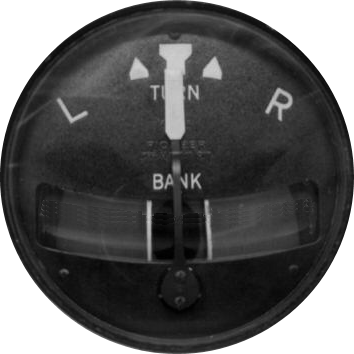 The turn and slip indicator (above) consists of a ball and needle; the ball indicates yaw (skid or slip), while the needle indicates direction and rate of turn.

The gyro of the turn and slip indicator spins around a horizontal axis whereby a turn causes precession and gyro movement, while a spring returns the gyro to neutral when the turn stops.

Most modern aircraft have a turn co-ordinator (depicted to the right) where the gyro is canted 35° and resultantly indicates turn rate irrespective of the ball position (yaw).1

The gyro for the attitude indicator spins about a vertical axis and provides pitch and bank information.

Most gyros require approximately 5 minutes to come to rotation speed.

1 Note the lower turn co-ordinator is indicated a standard rate turn to the left—if the bank is controlled precisely on the marker as shown, the aircraft will complete a 180° turn in 1 minute (3° per second)—this is a back-up manoeuvre for inadvertent flight into cloud (not dependent on vacuum gyros).  Note the turn is balanced—no yaw is indicated if the ball is in the centre.  If the ball deviates to left or right, the rule is to step on the ball using the rudder pedals, and this will produce directionally straight flight.  Timed-turns (using the turn co-ordinator) is a feature of the Commercial Pilot program.