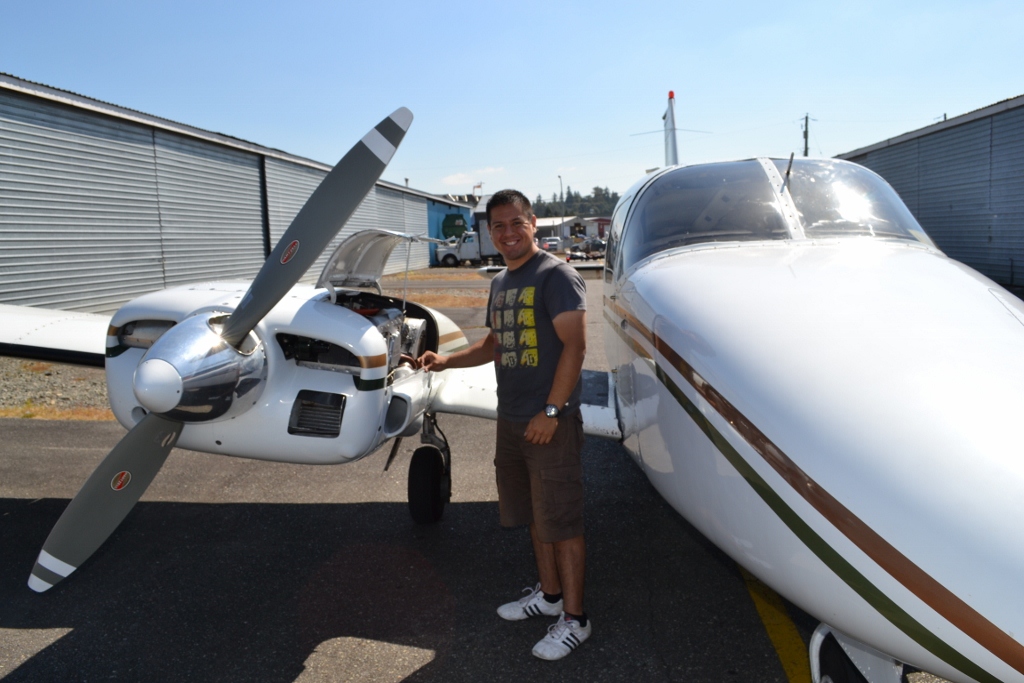 Welcome to some of the most interesting flight training you will do as a student—the Multi-engine Rating.  Your career as a professional pilot will entail numerous events of type-conversion training, when you transition to new aircraft—new equipment, new airspeeds, new procedures, etc.—but none will compare to the conversion training you are just about to take—from single-engine to multi-engine flying privileges.  Many years from now, when you are well entrenched in what will hopefully be a rewarding and safe flying career, you will perhaps look back to the Seneca, in retrospect, as an extremely little and somewhat plain aeroplane.  This will be, I hope, in stark contrast to the flashy, shiny, and very fast corporate or transport turbine-powered job that you will call “your office.”  In your training, up until now, however, you have been puttering around at 90 MPH in an aircraft that lacks the prerequisite systems for speed—multiple engines, retractable gear, and variable-pitch propellers.  With the training you are about to take, your takeoff weight and cruising speed will almost double; you will learn the pleasures, as well as hazards, of multi-engine aircraft; you will get used to the “thud” of extending landing gear, and you will learn to fine-tune the RPM of a propeller.  With the possible exception of your future transition to turbine engines, you will never be faced with such a new and exciting learning curve.

Be sure of something, however, as you begin training for your Multi-engine Rating—you possess all the skills and experience necessary to fly the Piper Seneca.  Flying aeroplanes is—well—still . . flying aeroplanes.  The environment in which we do our thing as pilots does not change—a takeoff is a takeoff, a stall is a stall, and a landing is . . well . . still a landing.  Flying aeroplanes is like riding a bicycle—you never forget the basics, and it always feels somehow comfortable.  Despite the demanding precision that is required when landing a multi-engine aircraft on Langley’s 2100’ runway—with a final approach speed of 90 MPH—all students do amazingly well, and learn remarkably fast.  While the speed is faster, the landing perspective never changes.1

I remind all students that, while a good portion of learning about multi-engine aeroplanes occurs in the cockpit, most is learned under a study light from books—especially the Seneca POH, and this Manual.  The emphasis in Langley Flying School’s Multi-engine Program is not just on technical flying skills and knowledge.  Instead, we are doing what is maximally possible to prepare you for your flying career, and like our Commercial Pilot Program, our emphasis is on Standard Operating Procedure.  We know—and you will come to realize—that all of professional flying is based on adherence to written rules and procedures.  Through written documents—such as the Company Operations Manual and the Company Standard Operating Procedures—acceptable margins of safety are maintained through all levels of management and flight operations within a commercial air-carrier.  Your job as a pilot is not just to fly aeroplanes, but to fly aeroplanes in accordance with these “written contracts” that establish mandatory rules, standards, and procedures.  In developing your skills as a professional pilot, we are challenging you to learn and apply the Standard Operating Procedures outlined in this Manual; if you treat this with the same priority that you would treat Standard Operating Procedures of the first company you fly for, you will be well on your way to a safe and successful flying career.  You will learn early on in the months and years ahead that the Chief Pilots you work under are not interested in extraordinary “right-stuff” pilots—instead, they are concerned with your ability to translate mere written words that make up standardized operations and procedures into actions that are practised before, during, and after every flight.

Part I of this Manual reviews an array of critical subjects and concepts related to flying the Seneca, in particular, and multi-engine flying in general.  This Part sets out the Air Training Syllabus, and reviews the planned Flight Cards2 that will generally be followed during the training.  There also appears a summary of the written examinations that are designed to facilitate learning, and the Flight Rules and Safety Precautions that govern training.  Various unique features of the Seneca are also outlined, and then discussions focus on the concept and definition of Vmc.  The formats of Takeoff Briefings are examined, as is the structure of the Seneca’s Checklist.

Part II of this Manual focuses on the basic operations of the KLN 94 GPS system that is the Seneca.  You will learn that despite initial appearances, the use of the GPS is quite simple and rewarding.  Remember that your future will always entail learning how to effectively use new and innovative cockpit equipment, especially in the realm of navigation and aircraft-systems management, so now is the time to get used to learning about the initially unfamiliar “black boxes” that have such a huge impact on how we do our job.  The basic architecture and organisation of the GPS is reviewed, with emphasis on the concept of an “active waypoint” and the OBS and LEG Modes.  The use of system’s Altitude Alert functioning is also set out.

Part III sets out the Standard Operating Procedures.  The concept of the “pilot-flying” (PF) is reviewed, and the two formats used for the completion of checklists are discussed.  Discussions then turn to aspects of multi-engine takeoffs and departures.  The “two-stage” takeoff is outlined, as are the three “departure segments”—including the application of safe multi-engine takeoff strategies to confined and non-confined runways.  Emphasis is then placed on the risks and requirements that will be required should an engine failure occur immediately after rotation from a confined runway.  The Standard Operating Procedures are then laid out under the various applicable subjects that make up this document.

Part IV summarizes the various drills and sequences that are conducted in the air during multi-engine flight.  These should be systematically reviewed prior to every flight, with the idea that they must be automatic by the time you do your ride with the Examiner.

Finally, Part V provides detailed descriptions of the requirements of individual exercises that will be flown during training.  Emphasis is place here on providing you with the background knowledge necessary to complete the exercises successfully in the minimum amount of airtime.  You will also find a comprehensive summary of the evaluation criteria that will be applied by the Examiner during the ride.  Exercises to be reviewed will be assigned prior to their actual flying, so be sure to take the time and review the material associated with each exercise prior to flight.  This will save you time, and lots of money.

A copy of the Seneca’s checklist appears in Appendix III.  Be sure to familiarize those items that are unique to multi-engine aircraft.

For your convenience, a Pre-flight Worksheet3 is attached as Appendix I.

1 The reality of an unchanging perspective during the approach for landing, despite changes in the aircraft size and speed, was first impressed upon me when, shortly after becoming a flight instructor, I had the opportunity to witness from  the jump seat the approach and landing of an Air Canada Boeing 727 at Montreal’s Dorval Airport.  I couldn’t believe how similar it was to landing a Piper Tomahawk at High River Airport—the increase in speed and size of the aircraft was effectively overshadowed by the increased length and width of the runway.  I remember clearly thinking “I can do this!”

2 “Flight Card” meaning the schedule of training to occur in each planned flight—a Test Pilot expression.

3 Thanks to Rita Methorst for the idea of this.